In the aftermath of Friday’s arrest of Kenny Johnson associate Brian West, revealing Johnson facilitated a $10,000 payout after his support of West’s real estate projects, I have just learned that his campaign manager and payout intermediary, his cousin Robert Burns, was convicted of stealing $22,500 from the U.S. Army. Johnson-associate Burns was convicted of “Larceny of Government Property,” in the amount of $22,500 (UCMJ-Article 121) and lying to investigators (UCMJ – Article 107). According to official documents, the “investigation established that Johnson’s associate Burns committed the offense of larceny when he stole U.S. Government property from his work area and sold it,” and that “Investigation established that Burns committed the offense of False Official Statement when he told this office a camera was his personal property knowing it belonged to the government.”

This comes on top of Johnson’s arrest, and subsequent admission, of an illegal sexual relationship with a minor student while he was a teacher and coach at Brevard Public Schools, leading to Johnson being forbidden from participating in Brevard Public Schools facilities, and Burns’ arrest and/or plea deals in a felony rape case in Colorado, felony domestic violence in South Carolina, and felony child abuse in North Carolina. Burns is also presently under investigation by the Florida Elections Commission for criminal political fraud involving his fake news site, The Space Coast Rocket, as well as his political committee, Friends of Florida, and owes the State of Florida more than $500,000 in fines for misconduct.

How these people are allowed to serve the public, let alone not sit in prison is beyond me. But rest assured, that I will continue tirelessly exposing crooks like Burns and Johnson until they are out of office, or better yet, in jail. 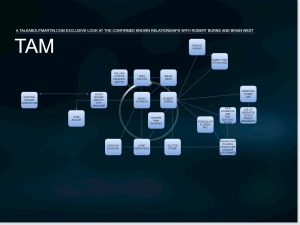 THANK YOU TO ALL OF OUR TAM COMMUNITY MEMBERS FOR BRINGING SO MUCH TO LIGHT – THE TRUTH WILL WIN.